You can go your own way

When Ivy started preschool she was VERY routine-oriented and VERY skeptical about anything outside of her norm. About a month after school started they had water day and sent a note home informing the parents that the kids were encouraged to wear their bathing suits under their clothes. Ivy had never worn her bathing suit under her clothes. The whole idea was ridiculous to her and more than her little three-year-old brain could handle. So, we went to school sans swimwear and I relayed this information to the teacher, who tried to encourage her by pointing out all the other kids who were wearing their suits. The kids proudly lifted up their clothing to show their suits, and her teacher said, "see, Ivy, everyone is wearing their bathing suit!" Ivy's response was brilliant: "Everyone, but not Ivy."

Peer pressure! We all experience it at varying degrees throughout life, and it's not always bad. Sometimes peer pressure can encourage us to take healthy risks and try something new, or push ourselves further than our comfort zone resulting in a boost of self-confidence or a new skill. Or sometimes, we learn the joy of wearing our bathing suits under our clothes! On the other hand, we're all aware of examples when peer pressure results in poor choices, especially during the teenage years, but we can address that later.

The point I want to make is this: when you find yourself in a precarious situation with your gut telling you one thing and someone you may or may not even respect telling you the opposite, listen to the  wise words of Lindsey Buckingham and remember, "you can go your own way."*

Not every instance of peer pressure is going to result in an after-school-special lesson. The key is that you need to make your own choices. Don't be afraid to go against the grain: go with your gut. If you're going to make a mistake, make it your own and not someone else's.** And OWN IT!

This is how we learn and grow and gain life experiences (that we can then write about on the Internet!).


*Yes, I know Mr. Buckingham was telling Stevie Knicks that their relationship was over and she could go her own way with Don Henley, but that's not really the point for this post. We can discuss break-ups another time. 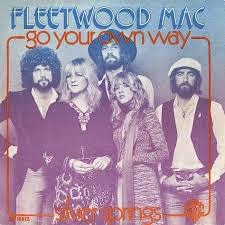 **Slight disclaimer on this one: if your own mistake is to do meth or something equally as risky and illegal and stupid, remember the equally  wise words of Frances McDormand in Almost Famous, "Don't take drugs!" 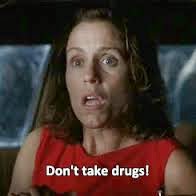