Don't spend too much time worrying "what if?"

I took my daughter to the doctor this week for her 6-year-old checkup. The night before, and a few times in the morning, we had this conversation: 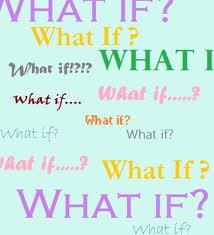 Ivy: Will I have to get a shot?

Me: I don't know, sweetie, we'll just have to wait and see.

Me: I know it will hurt, but it only hurts for a second and then it's over. Plus, we don't know if you need a shot so let's not worry about it just yet.


Another example. Someone I know has 2 little girls and told me that his wife watches MTV's "Teen Mom" and worries, "What if the girls end up like this??!!" I think we can all agree that show is extremely disturbing for many reasons (mostly the outfits and the butchering of the English language), and no one wants their daughter to become pregnant as a teenager, but... sitting up at night worrying about your 3-year-old losing her virginity (and her fashion sense) as a teenager is not the best use of mental energy.

If you must spend your time thinking "What if?" - spend it dreaming about fun and exciting things to come, instead of worrying.
Posted by Jen at 3:09 PM