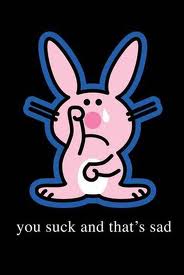 I recognize that starting a post with "Don't be" sounds a bit negative, but I want to be clear that I'm not saying you have to be an ultra positive, rose-colored glasses person. In my opinion, reality falls somewhere between Pollyanna and Eeyore. I consider myself to fall somewhere in the middle of the pessimist-optimist spectrum, but I would hope that if one has to lean toward one or the other, she would lean toward the positive.

Speaking of the negative end of the spectrum, I recently had the unfortunate experience of working with one of the most miserable people I have ever met. Let's call her the Wildebeest to protect her identity. She was openly rude, condescending and disrespectful. Every experience I had with the Wildebeest was negative, even though I tried my best to remain diplomatic and emotionally even. She entered every meeting in attack mode, even when there was nothing to attack. This was frustrating, but she was my client, and sometimes clients act this way to make themselves feel important. However, I soon learned that this attitude was not confined to her work life. One day before a meeting, the group was making small talk about vacations. Wildebeest complained, at length, that she and her family just took too many trips to Hawaii. The Wildebeest ranted, "How many times can you go to Hawaii? I mean, aren't there beaches in other countries we could go to?"

Who complains about having to take a trip to Hawaii? Really? I can understand talking to your spouse about trying out a new vacation spot, but I do not understand complaining to strangers about this problem.  If the biggest problems in your life are too many trips to Hawaii, and broken windshield wipers on your Range Rover, just keep your mouth shut.

I feel bad for the Wildebeest, because anyone who is the way she is cannot be happy, the people close to her cannot be happy, and that is a shame. Perhaps she should read my post about being a thankful person. She might just improve her life, and give those around her a little break.

The bunny in the photo really says it all. Miserable, angry, negative people - You suck and that's sad.
Posted by Jen at 12:11 PM 1 comment:

Be a Thankful Person 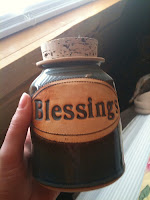 When I was in my early 20s (like, 2 years ago), a recruiter gave me a jar that said "Blessings" on it. The idea was that I should write down things I'm thankful for on little strips of paper and put them in the jar. Then, whenever I'm feeling low I can look in the jar and be reminded of the blessings in my life. I never wrote anything down (frankly I thought the jar itself was kind of stupid), but I do believe in the idea behind it.

Even though we all gripe and  moan about how difficult our lives are (like when it takes 45 minutes to get our delivery pizza instead of 30), we do have many, many things to be thankful for. Remembering the blessings in our lives can encourage us when times are rough, and humble us when times are great. Today, I am particularly thankful that I live in Los Angeles and it is 70 degrees in February.

And, being a thankful person can help save you from being a miserable, angry, negative person, which will be the subject of my next post.
Posted by Jen at 1:11 PM No comments: