Be nice to cops, IT guys and anyone making or bringing you food

Ok, to begin, be nice to people in general. Smile, be friendly, etc. That is a subject for another post.

There is absolutely nothing to be gained from being rude to cops, IT guys and anyone making or bringing you food, and there is so much to be lost. 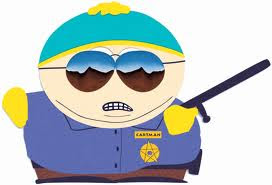 First and foremost, cops. If and when you are pulled over or have other interaction with cops, refer to them as "Sir" or "Ma'am." Do NOT under any circumstances give them attitude. Really, the best thing to do is say as little as possible and respond to any questions they ask as clearly and humbly as you can. This doesn't mean they won't give you a ticket, but at least you won't dig yourself into a deeper hole.

Second, IT guys (or girls). If you choose/find yourself in a career that requires you to work in and office and have a computer, you will soon learn that the IT guy can be your best ally or your worst enemy. I'm not saying you should suck up to this person or be fake, but a little extra friendliness and patience, when necessary, may be the difference between getting your computer fixed quickly or spending a week with a 20 pound loaner laptop from 1995.

Last but not least, anyone who makes or brings your food. Bad service is unacceptable, but being rude to your waiter, bartender or anyone else who works in the restaurant is only going to result in worse service and spit in your food (or worse: watch the movie "Waiting" with dreamy Ryan Reynolds... I digress...). If the service is that bad and you feel the need to make a point, remain gracious throughout the meal and make your point after you've already eaten. For the most part, however, I'd suggest you let it go and complain to your friends about it later.
Posted by Jen at 11:36 AM